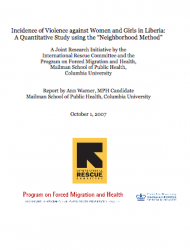 The IRC Liberia and Columbia University’s Program on Forced Migration and Health undertook a population survey in 2007 to quantify the magnitude of violence against women and girls in IRC's operational areas. The study focused on three "types" of physical violence: non-sexual domestic abuse, marital rape, and rape outside of marriage. Findings from the research show that violence is widespread in IRC's operational areas in both Montserrado and Nimba Counties. Well over half of the population had survived at least one act of physical violence during the previous 18 months. When disaggregated by age, one-quarter of minors in Montserrado County and one-fifth of minors in Nimba County had experienced an act of physical violence in the previous 18 months.