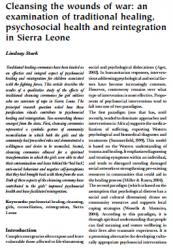 This article describes the results of a qualitative study of the effects of traditional cleansing ceremonies for girl soldiers who are survivors of rape in Sierra Leone. The principal research question asked how these purification rituals contribute to psychosocial healing and reintegration. Two overarching themes emerged from the data. First, cleansing ceremonies represented a symbolic gesture of community reconciliation in which both the girls and the community had prescribed roles and demonstrated a willingness and desire to be reconciled. Second, cleansing ceremonies allowed for a spiritual transformation in which the girls were able to shed their contamination and leave behind the ‘bad luck’, anti-social behavior and negative self-perceptions that they had brought back with them from the war. Both of these aspects of the cleansing ceremony have contributed to the girls’ improved psychosocial health and have facilitated reintegration.