A lack of representative data on gender based violence (GBV) has prevented humanitarian aid and human rights communities from being able to identify what community characteristics and interventions are effective at preventing GBV. The shortcomings of present GBV data sources have been explored through a series of compelling studies conducted by the CPC Network. Network partners have led an effort to use an innovative research methodology known as the ‘neighborhood method’ to gather population-based data on rape and other forms of GBV in a variety countries recovering from conflict. 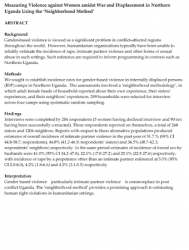 This report presents findings from a population survey conducted in Liberia in 2007 to quantify the magnitude of violence against women and girls in IRC's operational areas. 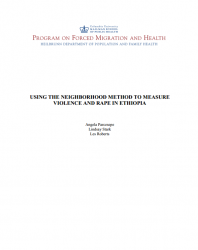 Using the Neighborhood Method to Measure Violence and Rape in Ethiopia

This report presents the findings from the use of the Neighborhood Method to measure incidents of violence against women and girls in two Somali refugee camps and one of the surrounding host communities. 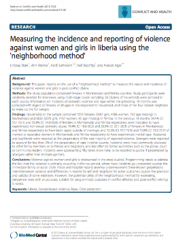 This article reports on the use of a “neighborhood method” to measure the nature and incidence of violence against women and girls in post-conflict Liberia.