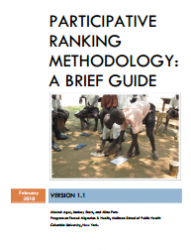 This is a practical guide to the Participatory Ranking Methodology (PRM). PRM is a ‘mixed methods’ approach to data collection, in which a group of knowledgeable participants are guided in generating responses to a specific question or set of questions. It is a ‘mixed methods’ approach in that it draws on both quantitative and qualitative methodologies to generate rich, contextualized data that can nonetheless be counted, ranked, and compared across or within groups. This methodology promotes an engaged and participatory process, which rapidly highlights key findings while providing the opportunity for deeper analysis as resources permit.    Collected in a structured manner, results can be swiftly consolidated and used to develop action plans addressing identified priorities. 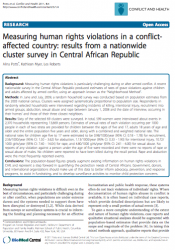 Grave Violations of Children’s Rights and Mortality in the Central African Republic: Results of a Nationwide Survey 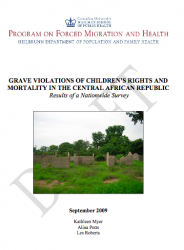 For this report, UNICEF and the CPC Learning Network executed a nationwide survey covering four of the six grave violations of the rights of children in the Central African Republic. This experience shows it is possible to collect representative, population-based estimates regarding the occurrence of grave violations in difficult and politically unstable settings, although further validation is required.